Is this the most important element in maintaining a person’s fitness?

Maintaining a fitness routine is undoubtedly a difficult task but once we get in the habit of going, sometimes it seems almost harder to not go put in the work than skip the gym. And the counter to that is true too. If you are not in the habit of going to the gym then working out can seem like a monumental task. Many of us experienced this coming out of the recent pandemic. It was hard after taking off so much time to get back in the gym and some of us are still trying to find our way back to the exercise habit formation.

In a December of 2022 study, 27% of respondents indicated that they were still working out less than they were before the pandemic.

The connection between exercise and habit formation has been widely studied in scientific literature. Research has shown that regular physical activity can lead to the formation of exercise habits, which can have a positive impact on an individual’s overall health and well-being.

One study published in the Journal of Sport and Exercise Psychology found that habit formation plays a significant role in the initiation and maintenance of regular physical activity. The study surveyed over 1,000 adults and found that those who reported engaging in regular physical activity also reported higher levels of habit strength, indicating that exercise had become a habitual behavior for them. 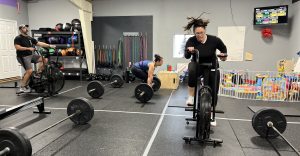 Another study published in the journal Psychology of Sport and Exercise found that the formation of exercise habits is related to the amount of time spent engaging in the behavior. The study found that the more time an individual spent exercising, the more likely it was for the behavior to become a habit.

Research also indicates that the release of endorphins during exercise can play a role in the formation of exercise habits. A study published in the journal Neuropsychopharmacology found that endorphins, also known as “feel-good” hormones, can act as a reward for engaging in physical activity, making it more likely that the behavior will be repeated in the future.

In addition to these studies, many other studies have been done that support the idea that exercise becomes a habit through repetition and reinforcement. For example, a study in the Journal of Behavioral Medicine found that people who stick to their exercise routine have a higher chance of forming an exercise habit. The study suggests that when people stick to their routine, they are more likely to feel the positive effects of exercise, which reinforces the behavior and makes it more likely to be repeated in the future.

To make going to the gym a habit, you can try the following:

Let us know how we can help you get back in the habit of regular exercise! We are here to help!!

And if you are local and looking for a gym that will help you get back into the habit of fitness, feel free to stop by the gym during our Open Gym hours to chat with a coach (Mon-Fri 7:30am-9am and 3-4:30pm) or any day M-F between 5:30-6pm.

Previous Post: « CrossFit Actually Prevents Injuries…(Yes, you read that correctly)
Next Post: Dr. Andy Galpin Shows Us How To Get Results »

Book Your No Sweat Intro

Have you struggled to find the right fitness or nutrition program that works for you?

The connection between exercise and habit formation has been widely studied in scientific literature. Research has shown that regular physical activity can lead to the formation of exercise habits, which can have a positive impact on an individual's overall health and well-being.